At the beginning of 2015, a Sublime Text Package for the script language GDL appeared on the developer platform Github. The package comes from the German developer “Runxel”, https://github.com/runxel/GDL-sublime.

Sublime Text is considered by many freelance and professional developers of all kinds of programming languages, but primarily for web applications, to be the ultimate editor.

Sublime Text is extremely versatile and extremely customisable, and also has the option of installing language packages and plug-ins automatically and keeping them up to date via a so called package control.

Runxel’s package contains the complete syntax highlighting for almost all GDL commands and global variables, whereby own colour schemes can be created or adapted. Code snippets are also possible (some are included in the package), which can be entered via shorttag and TAB. Finally, the package also has autocomplete code.

In order for Sublime Text to be used effectively for GDL programming with the present package from Runxel, there should be a direct link to ArchiCAD in some form. Since external editors can theoretically only connect directly with ArchiCAD via the API interface, and since this solution seemed to us too complex and, above all, too expensive, we have established an indirect link with ArchiCAD, whereby the GDL objects are transferred from ArchiCAD to Sublime and visa verce via the LP_XML converter tool (referred to below as the XML converter).

Since ArchiCAD 23 there is a new function in the LP_XMLconverter, namely the conversion of GSM files into single scripts editable with text editors. The method is called GSM2HSF.

This routine is similar to GDLnucleus, so it can largely replace it, but only from ArchiCAD 23 onwards. Runxel has built this routine into his gdl-sublime-built, so that you can work very effectively with it.

In GDLnucleus the automation of this process is taken over by the build system described here, which carries out all the necessary conversion steps at the push of a button and thus allows smooth work in such a way that it is possible to switch from ArchiCAD to Sublime Text and back at any time without any losses. 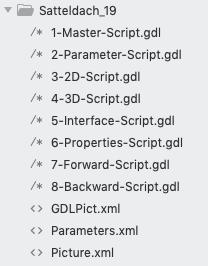